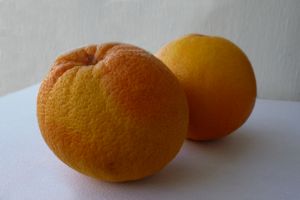 the Japanese prefecture of Oita, located on Kyushu the most southwesterly island of that country,  for centuries they have been cultivating varieties of citrus fruits which are not widely available in the rest of the world. Among these is a fruit called kabosu. Alerted by the well-known fact that in this region cancer is rare and the population live long, healthy lives, Japanese scientists conducted a number of tests on kabosu. They discovered that the pulp and skin of this fruit contain a substance called naringin. In further experiments in vitro naringin was dropped on to cancer cells. The results were quite spectacular. Video sequences show how the nuclei of the cancer cells disintegrated forming little globules. What was happening was the process of apoptosis or cell “suicide”.

The good news for those of us who do not live in Oita prefecture is that the same scientists carried out the same experiments using grapefruit and they verified that it also contains naringin, so grapefruit essential oil is another tool that we may think about offering when faced with animals suffering from cancer.

(The information contained here is not a substitute for professional veterinary care.)