Yesterday we decided to take trail along the river. When we had tried to go there before with Sasha it was impossible as the trail was totally overgrown. However, we discovered that it had been cleared so we went along it following a circular route which brought us out quite close to home. 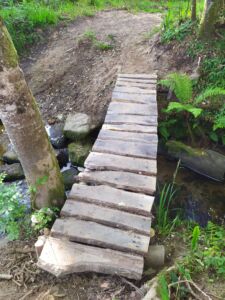 Today we decided to take the right fork across the river. The bridge was a rudimentary wooden structure and we had some doubts whether the dogs would be happy to cross. We need not have worried. They crossed without a second thought.

Along the way we met a man with his little male dog who decided that it would be much more fun to come along with our two ladies, so we had to double back for a stretch so that he could get back to his owner.

The trail itself was wonderful following the course of the river. At intervals along the way  there are some old water mills: some are intact while others are mostly ruins. The terrain is varied, up and down, with tree roots, stones and other obstacles for the dogs (and us) to get around. (Turid Rugaas would be happy about that!) At one point there was a large tree trunk blocking the path so that gave the opportunity for some problem solving for Salma. At another spot we had to cross the river again, but this time the “bridge” was a lot of stones and rocks. That gave the girls a puzzle to solve too but they soon found their way across.

The hardest part came at a point which in theory should have been the simplest. We had to cross the river again but the flow of water between rocks was narrow and we could cross it in one step. However, Salma stopped and began to lick her lips. We decided not to force the issue but turned around as we had already been walking for over an hour and the return trip involved a bit of a climb.

As I looked back at the spot, I realised what the issue could have been. The water was making quite a sound as it funnelled between the rocks, and the sun was shining on the water which was glinting in the sunlight. I was reminded of something Temple Grandin explained when she was doing a survey at an abattoir where the cows were reluctant to pass through a certain point. She realised that the sun was shining on pools of water on the floor and the glinting was off-putting for the cows. Could it have been the same reaction in Salma? We will go back another day at a different time when the angle of the sun is different and see what her reaction is then.