Bobby: what a sad existence!

Home/Uncategorised/Bobby: what a sad existence!
Previous Next

Bobby: what a sad existence! 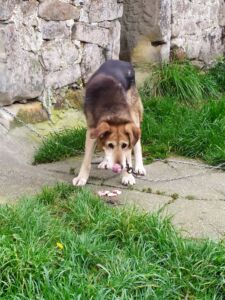 Almost every afternoon we have been walking past a property where nobody lives. Today we met a neighbour who invited us to go inside. He said “Maybe we will see Bobby.” Bobby turned out to be a dog. In all the times we had passed by we had never seen or heard a sound. We looked in the kennel and saw the saddest sight. A dog was lying sleeping and did not even make the slightest sound or movement as we stood there talking. So still was he lying that I wondered whether he was alive or dead. How sad is that! To spend all day, every day chained up all alone.

After our walk I decided to go back down with some food and see whether he would respond. He did. Slowly he came out of the kennel, and I put a few pieces of meat on the ground. He smelled it but did not seem to know what to do with it. Then he approached me and stood quietly asking to be touched. His coat is dull and rough, standing up in places. He is quite old with white around his muzzle. I did some TTouches, like Noah’s March, along his body and some ear touches. He went back to the food and ate a piece of meat. However, it seems that contact with a living person was more important than the food. After a little while he seemed to become more animated and walked around sniffing the ground where the other dogs had been and he also sniffed the air all around before eating another piece of meat.

A couple of times he went back inside his kennel only to come straight out again and come up asking to be touched. Finally he went back and I left.

What a sad existence poor Bobby has! Does this not constitute mental cruelty? I think we will have to visit him every day now that we know that he is there.