Dealing with Loss and Change

Home/Uncategorised/Dealing with Loss and Change
Previous Next

Dealing with Loss and Change 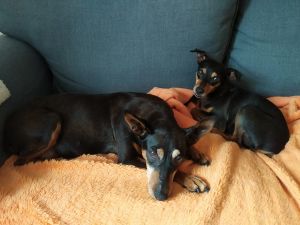 Tellington TTouch work, as in many other disciplines, we say that if we want something to change we must first change something either in the environment or in how we do things. If we keep on doing the same old thing, then how can anything change?

In recent days I have seen how a change in circumstances, albeit involuntary, can lead to change which may not always be what we would desire.

In the final days of the life of my bearded collie, Sasha, Ophie, mummy mini pinscher, became extremely anxious. She hovered around him and constantly looked for reassurance from us.

Baby, the most fearful of our four cats and certainly the most sensitive, stayed by his side from the moment he became ill. When we took him out, there she was beside him, rubbing against his fur. The result was that she became more integrated and more visible.

The morning Sasha died, we allowed both minis into the room but, although they approached his bed, they seemed to think that he was just asleep as he had been lying quietly there for so many days. As the day wore on, however, they both became agitated and searched everywhere. Finally Ophie found where we had buried him and she began to dig.

Since that day she has changed. She used to be quite extrovert and forward, but she has become insecure, anxious and sad. She even seems to have aged. Both mother and daughter, Ophie and Mimi, always commandeered Sasha’s beds, but since the day he left they have not gone near his bed much less lie on it. It is as though Ophie has lost her structure and her beacon. When they came to us as rescues Sasha was kind to them, allowing them to do whatever they wanted: take his beds, his food, anything… There seems to be a rung missing from the ladder of her life.

Mimi does not display the same anxiety or depression. The major difference in her is that before she used to bark as an alarm to bring Sasha out to take care of things. Now she barks in warning, but finds herself facing the “danger” alone which she finds intimidating, so she goes forward and then retreats – typical homoeopathic Lycopodium.

As her mother has lost confidence and courage — at least temporarily — Mimi seems to be coming forward. She does not have the intrinsic valour, but she is flexing her courage muscles and it remains to be seen how she will develop from here. This can be seen in small details: where before she would not take food in the presence of her mother who, it must be said, is a food fiend, (perhaps because she was used as a breeding bitch and may not have been fed enough) now she is more prepared to have a go.

With the change in the whole domestic dynamic with the loss of a pivotal member, the others are having to find a new equilibrium. Undoubtedly Ophie is the most negatively affected.

During a zoopharmacognosy session the oils she chose were quite significant: calming and nurturing oils and oils for separation, loss and lack of confidence. Her future choices may help us understand how she is progressing.